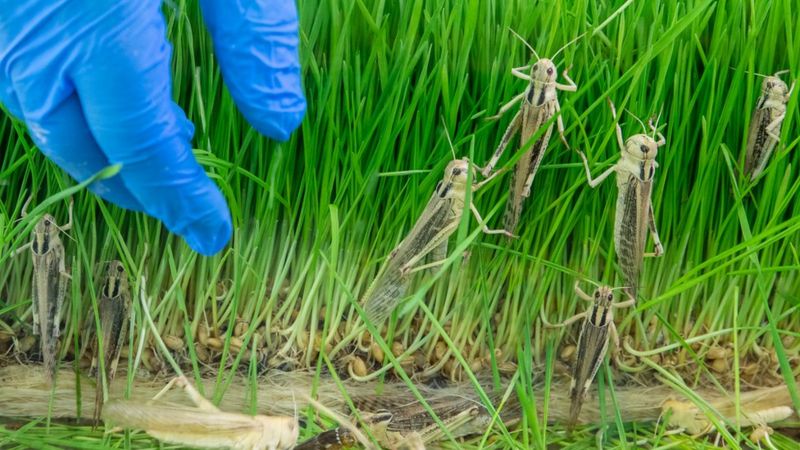 The edible insects coming to a supermarket near you.

As per a news article on BBC, it has long been suggested that we should start eating insects to help the environment, but for many of us it is not a palatable thought. One Israeli firm is hoping to win over the squeamish by adding different flavourings.

The little gummies are packed with protein, but not from soy or gelatine. They are instead made from an edible, jumping insect – locusts, which are a type of grasshopper.

“Grasshoppers taste like pecans, mushrooms, coffee and chocolate,” adds Mr Tamir. “But with our range of food we can add in different flavours… the gummies come in orange and strawberry flavour.”

The Israeli entrepreneur says he became fascinated with grasshoppers as a child, after hearing stories from his grandmother, who was the cook on a kibbutz, or collective farm.

“I learned about the 1950s, when Israel suffered from both food insecurity as well as locust swarms flying in from Africa and destroying the crops,” he says.

“While most kibbutz members ran to the fields to scare the grasshoppers away, the Yemenite and Moroccan Jewish members collected tons of them to eat.

“That’s when I learned that grasshoppers are food for billions around the globe.”

The insects have long been eaten by communities across Africa, Asia, Central America and the Middle East, but for many people in Europe and North America it remains an unwelcome thought.

Mr Tamir hopes to change all that, and his firm is about to introduce a range of products. In addition to the sweets there will be energy bars, burgers and falafel balls.

If you are still not convinced that insects will ever become part of the Western diet, some experts believe there may be eventually no choice due to environmental concerns and projected global population growth.

By 2050 the world population is expected to reach 9.8 billion, up from the current 7.7 billion.

With another two billion people to feed, some say that traditional farming will not be able to keep pace. And that, at the same time, switching to insect protein will be far better for the environment than rearing cows, sheep and other mammals.

For a complete read of this interesting article, please click below:

Insider view: The private sector’s role in the Paris Agreement