MJ Hudson Advisers (FRN: 692447) have deemed that this text does not constitute a financial promotion.

This research note gives a quick overview of the Mexican electricity sector, with a particular focus on solar PV (Photovoltaic), for which Mexico is ideally suited, but which is currently massively underdeveloped versus its potential. This is based on the IEA (International Energy Agency) publication ‘Energy Policies Beyond IEA Countries, Mexico 2017’, chapters 8 and 9, unless otherwise indicated.

Electricity demand in Mexico has grown steadily for decades as its economy grew and as a larger percentage of its population gained access to electricity (99% 2014, 94% 1990 – http://data.worldbank.org/indicator/EG.ELC.ACCS.ZS?locations=MX ). See Graph 1, below. Demand touched 257 TWh (terawatt hours) in 2014, increasing 37.5% during the previous decade. Industry is the largest electricity consuming sector, accounting for 55.4% of total demand. This share is high in comparison to other OECD countries as Mexico has a large export-oriented manufacturing sector. Consumption in residential, agricultural and service sectors remains low by OECD standards (hence with potential to rise). Electricity demand peaks in Summer because of the widespread use of air conditioning; a good match with Solar PV supply.

Around 60% of Mexico’s electricity comes from natural gas.  In comparison to IEA member countries, Mexico’s share of fossil fuels in electricity generation was sixth-highest in 2015.  Put another way, its share of clean energy sources was sixth-lowest.  This, despite excellent wind and solar resources.  Graph 3, below, shows the supply mix in 2015. 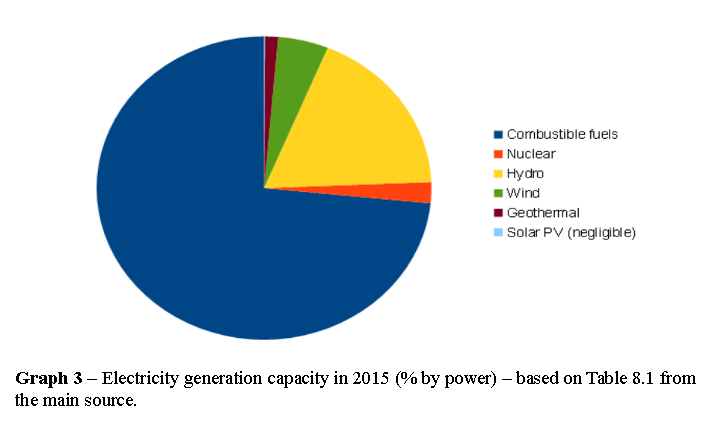 The solar PV industry has been almost non-existent in Mexico until very recently.  In 2015, it accounted for just 54 MW of total installed generation capacity of 67.3 GW (gigawatt).  This, despite the fact that Mexico’s solar resources are among the best in the world, with annual daily solar irradiance levels ranging between 4.4 kWh/m2 (kilowatt hours per metre squared) and 6.3 kWh/m2 and the entire country lying between 15° and 35°, commonly considered the band most favourable for solar resources (with the lowest average levels in the country comparing favourably with the highest averages in Germany and Japan, the world’s second and third largest solar producers). Mexico’s total solar resources are estimated at 5000 GW, according to the Ministry of Energy (SENER), equivalent to 75 times the total installed power generating capacity today.  This complete mismatch between potential and actual use of Solar PV is a direct result of the previously inflexible structure of the electricity market in Mexico.  Solar PV could potentially be one of the main beneficiaries of the electricity market reform that began in 2013 (outlined below).
*

Depending on the source, demand is expected to grow either quickly, or very quickly over the coming years.   In the 2016 IEA World Energy Outlook Special Report on Mexico, demand is expected to grow at 2.4% between 2014 and 2040 (if energy reforms are fully implemented), a pace that is more than three times faster than the OECD average.  CENACE, the Mexican electricity system operator, project stronger demand growth of 3.5% a year from 2015-2029, to reach 472 TWh in 2029  (+ 83% versus 2014).

As for supply, with the electricity reform of 2013 opening the door to private investment, and providing incentives for clean energy (as described next), renewable sources are expected to play a much greater role than they currently do – their share in total generation is expected to more than double to 37% in 2040.  Solar PV is expected to jump from 0.2 TWh in 2014 to 52 TWh in 2040, an increase of 2500%.

Since 2013, Mexico has been undergoing an historic reform in its electricity sector, moving away from a government owned monopoly and towards a competitive market framework designed to attract clean energy investments.   According to the IEA, this reform is one of the most ambitious, comprehensive and well developed electricity reforms in the world since the 1990s and has been implemented at full speed in only three years.  The aim of these reforms is to increase efficiency, address electricity prices (tariffs are on average 25% higher than US), high subsidies (without subsidies the average tariff would have been 73% higher than US) and high network losses (21.3% of electricity is not charged).

The main instrument to support the development of renewable energy is the newly introduced Clean Energy Certificate (CEC); clean electricity projects developed after August 2014 receive one CEC for each megawatt-hour of clean energy produced.  In consequence, generators of clean electricity will obtain additional revenue by supplementing their sales of electricity and capacity with the sales of CECs.  The demand for CECs is created by introducing an obligation on retail suppliers and on qualified consumers to buy a certain share of their electricity requirement from clean sources. The quota is announced three years in advance of the compliance period.  The Ministry of Energy sets the annual quota obligation and increases it every year.  For 2018, the quota is 5% and for 2019, 5.9%, corresponding to around 12 million certificates in 2018 and 14 million in 2019.  Certificates can also be sold under bilateral contracts and, from 2018 on, in an annual market.  CECs are bankable and do not expire.

As part of the electricity reform, long-term auctions of CECs, electricity and electricity generating capacity  (15 years for energy and capacity, 20 years for CECs) have been introduced as a way to bring revenue certainty to investors in these relatively capital-intensive projects.   Auctions are held once a year for delivery starting three years later.  Winning bidders must enter their projects into operation within three years.

The electricity sector reform opens a real opportunity for developing renewable energy capacity. This has been proven by the results of the two first long-term auctions, held in 2016, in which more than 14 TWh of CECs were sold. Solar PV was granted the majority of CECs, followed by wind power.

In addition to the CECs, several other support instruments for renewable energy are available. These include a tax incentive allowing for a 100% income deduction for investments made in renewable energy and efficient cogeneration, for net metering for installations with installed capacity under 500 kW, soft loans and a Sustainable Energy Fund to promote projects on energy efficiency and renewable energy. Non-financial instruments include knowledge-sharing and administrative procedures, such as the National Inventory of Clean Energy, the National Atlas of Potential Zones for Clean Energy Development and an electronic online portal for processing renewable energy project permits. 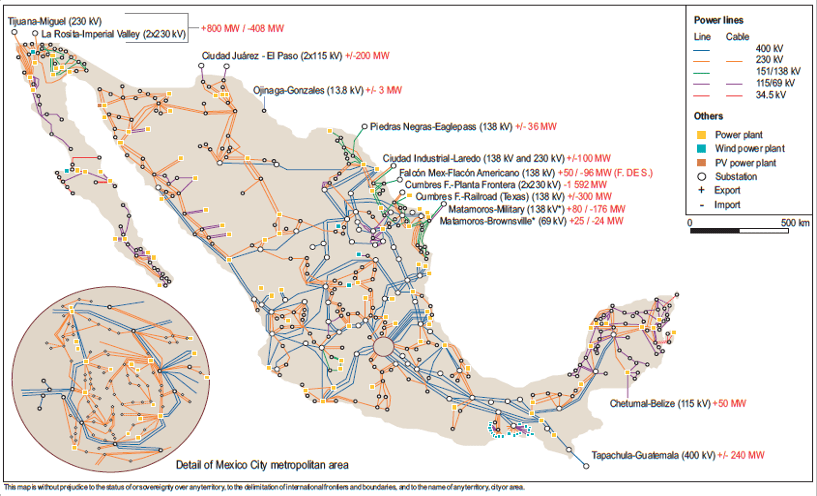