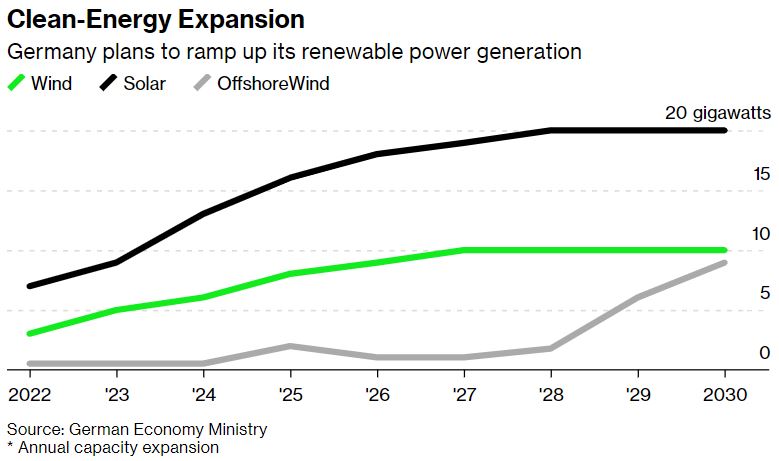 As per a recent article in Bloomberg, Germany plans to rapidly accelerate the expansion of wind and solar power, bringing forward a target to generate almost all the country’s electricity from renewable sources by 15 years to 2035.

The Economy Ministry, which also oversees energy and climate policy, proposed new legislation on Monday that aims to roughly triple the annual additions from onshore wind and solar facilities. Offshore wind capacity is set to more than double.

Germany is launching a series of measures to diversify its energy sources away from Russia after Moscow’s invasion of Ukraine. Germany relies on Russia for more than half its natural gas, and a decision to phase out nuclear power — the last three reactors are set to go offline this year — has left Europe’s largest economy vulnerable to disruption.

To avoid a short-term energy crunch in the future, the ministry also proposed measures that would force operators to maintain minimum levels in gas storage facilities.

The ministry called out Russia’s Gazprom PJSC as having especially low reserves in Germany this winter, when households were hit by soaring heating costs. More than 30% of Germany’s gas reservoirs are controlled by the Russian gas giant.