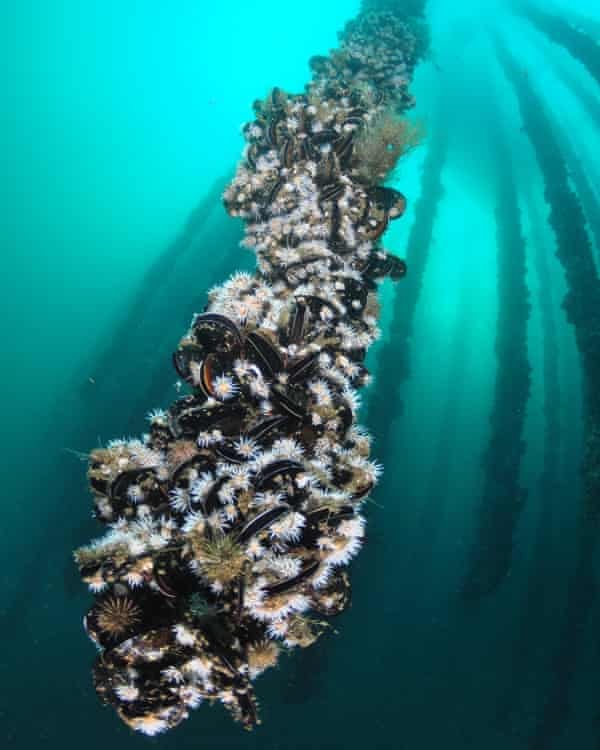 Healthy Kicks Plan To Utilise redundant wave power technology to farm Bivalves and Create Healthy Ecosystem where there were none gains credibility.

Can bivalve aquaculture prevent the “widespread institutional failure” of our attempts to tackle climate change?

According to The Fish Site, bivalve mollusc farming and microalgal farming enterprises provide viable, profitable and sustainable alternatives to all the industrial carbon dioxide capture and storage technologies being promoted today.

“Deep-rooted, widespread institutional failure” is one of the headlines of the Dasgupta Review by Prof Sir Partha Dasgupta, of the University of Cambridge, in the Economics of Biodiversity.

Published on 2 February, this detailed review was commissioned by the UK Treasury in 2019 – the first time a nation’s finance ministry has authorised a full assessment of the economic importance of Nature. The central conclusion is that sustainable economic growth requires a different measure than gross domestic product (GDP).

Or, in the words of Prof Dasgupta: “Truly sustainable economic growth and development means recognising that our long-term prosperity relies on rebalancing our demand of nature’s goods and services with its capacity to supply them.”

We also believe that there is scope for greater use of the High Seas to replace forage fish with mussels in the diets of farmed fish and produce the increasing amounts of food that will be required by the growing human population, whilst at the same time pulling down carbon from the atmosphere with bivalve cultivation. The vision is to preserve the oceans as a healthy and sustainable food source for mankind by emphasising conservation and ecosystem balance beyond coastal waters. You can read the comlete article here.

In another article on The Fish Site, it is articulated that as the global average temperature increases and CO2 within the ocean begins to reach saturation the ability of the ocean to absorb carbon will alter significantly, writes J. P. Hickey, School of Natural and Built Environs, University of South Australia.

Climate change induced by global warming has become a heavily discussed topic over the last two decades, which is understandable when the likely disruption to ecosystems throughout the Earth and therefore human existence is considered. CSIRO predicts that Australia, for example, will become generally hotter and drier in the future.

The oyster industry is well established in SA and the establishment of shellfish as a carbon sink could be of great benefit to SA, particularly to regional areas. Also, with its reputation as the driest state in the driest continent, SA is not necessarily the ideal location for thirsty Biosequestration projects. This should give impetus for a greater utilisation of alternatives to Biosequestration in the state. Qualifying as an ‘additional’ activity under the Kyoto Protocol may prove difficult for the oyster industry, especially as it is self-sufficient and not reliant on funding from carbon offsets. The industry will remain sustainable as long as stocks are kept below the carrying capacity of the water body and diseases are not introduced. The main advantage of oyster farming is that unlike other ocean sequestration techniques, the oyster shell permanently removes carbon from the ocean as well as the atmosphere. This aspect will become more important as global warming and ocean carbon capacity affect the amount of carbon absorbed by oceans. A direct comparison between Biosequestration activities and shellfish farming may be unrealistic as the former is underpinned by photosynthesis and the latter by respiration. An independent assessment of the shellfish industry would be required to determine the extent of carbon sequestration and the overall costs of generating carbon offsets through this method. After additionality, the carbon price tag will ascertain whether shellfish sequestration is a viable option in the struggle against global warming. Regardless of anthropogenic policy making, however, shellfish will continue to play their role in mitigating the greenhouse effect. Here is the link to the complete article.

Eat this to save the world! The most sustainable foods – from seaweed to venison

According to another article on The Gaurdian, Good eating starts at home, and one of the most important things we can do for the future of the planet is to minimise food miles – so our staples should be foods that can grow perfectly well in this country,” advises Patrick Holden, chief executive of the Sustainable Food Trust. Another basic principle is to do your best to understand the story behind what you’re eating – be it plant or animal: “If you know who produced your food, they are accountable to you, and more likely to care.

Consumed in moderation, red meat is highly nutritious and also increases the bioavailability of nutrients in plant foods. “There is a good reason humans have coevolved alongside animals which eat grass,” says Carolyn Steel, author of Sitopia: How Food Can Save the World. “Grass is rich in nutrients, but we can’t digest it. So we eat animals that can.”

The case for eating oats is strong – although they are not the silver bullet of sustainability they’re sometimes claimed to be. They aren’t, for instance, a nutritional replacement for dairy, and can be as damaging as any other monoculture crop if grown intensively. But if they are “grown without artificial chemicals, in a way that is friendly to the ecosystem”

“Britain grows about 50% of all vegetables it consumes, and 16% of all fruit. We should be growing double that,” says Lang. We talk a lot about agriculture, “but it is horticulture we have to increase and invest in – and education as to what seasonality means”. Strawberries grown in heated plastic tunnels in February are not the answer; a mix of fresh, seasonal produce, and produce preserved from previous seasons, is.

The article also mentions Mussels and other bivalves, Pulses, Seaweed, Venison, and Waste Food. The complete article can be ready here.

To get more information about My Healthy Kick’s future plans, please register by clicking below: