Welcome to the thrid edition of Weekly Environmental News.  Each Friday we will select a few choice environmental titbits from the preceding week, a mixture of news headlines, interesting third party research, 350 PPM company news and perhaps some random stuff thrown in to make things slightly less dull. 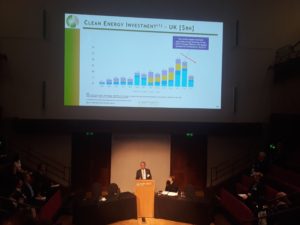 The annual CleanTech Innovate 2018 conference took place a couple of weeks ago at the Royal Institution in London.  To add to what I said in an earlier edition of weekly news, I will describe a few more of the companies who took part.

The ‘game-changer’ award was won by Flint Engineering, who has designed a patented carbon reducing ‘heat mat’, a low cost flat metal sheet which ‘transfers heat very quickly and very efficiently’.  The heat mat can be used to skin buildings (delivering natural heat to the building),  in transport (for stabilisation of electric batteries and producing cabin heating/cooling), in refrigeration (replacing current shelving to reduce running costs), amongst other applications.  They see their potential UK market opportunities at over 20 billion a year, with the global market x100 this.  Most pitches have crazy numbers like this in them, and I don’t always find them very helpful, but clearly this is a technology with a potentially wide reach.

Meanwhile, best pitch of the day was won by RAB Microfluids, and rightly so, in my opinion (the description here will not do it justice).  RAB provide a ‘lab on a chip’ that can be used to do on-device analysis of oil in heavy machinery (1000x faster and 10x cheaper than the current ‘send the sample to laboratory’ approach).  The idea is to ‘transform maintenance strategies from preventative to predictive maintenance’.    Again, this is a technology with wide applications across many sectors – the initial focus will be in the energy production(wind turbines), maritime and manufacturing sectors.

Hands down the funniest and weirdest pitch of the day (not an actual award but perhaps it should have been) came from Cryomation.  Cryomation is a new way of disposing of bodies that involves supercooling, fragmentation and drying.  The claim is that this is a cleaner and greener way of doing things.  The best stat of the day was the target market being ‘7.5 billion people’ and ‘9.5 billion forecast by 2050’,  though only 12% of people want to be frozen and smashed to pieces today.  Still a pretty big market. 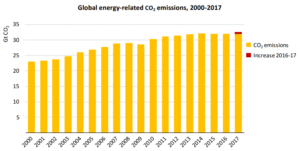 The 2017 IEA report on global energy and CO2 trends does not make great reading if you are hoping for signs that we are turning the corner in the fight against climate change. On almost every metric you can think of things are still going in the wrong direction year over year: energy demand was up by 2.1% (with 75% of this coming from fossil fuels), CO2 emissions were up by 1.4% (after 3 years of no growth) and oil, natural gas and coal demand all grew. Renewables did see the highest growth rate of any energy source, however, with China and the US leading the way (take that Trump). Energy efficiency was also up 1.7%, but this is lower than the average over the last three years. Read the full report here: http://www.iea.org/publications/freepublications/publication/GECO2017.pdf 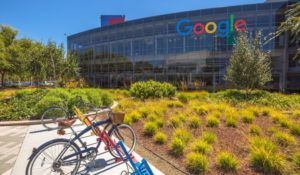 ‘Google announced this week that it currently holds contracts to purchase 3 gigawatts of output from renewable energy projects, which is by far the most renewable energy purchased by a corporate entity to date.

The tech giant says these contracts have led to more than $3 billion in new capital investment around the world. They also allowed Google to officially achieve its 100 percent renewable energy target.

In December 2016, the company revealed it was on track to purchase enough renewable energy to match all the electricity it would consume over the next year. The 2017 numbers are now in, and it’s official — Google met its goal.

Google’s total renewable energy purchases actually exceeded the amount of electricity the company used in its operations last year, including its offices and 15 data centers located across the globe.’ 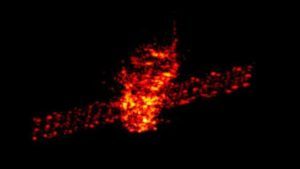 It would have been more exciting if it fell in someone’s garden, but alas it mostly broke up and fell in the Pacific ocean somewhere: http://www.bbc.co.uk/news/science-environment-43614408