MJ Hudson Advisers Ltd (FRN:692477) have deemed that this text does not count as a financial promotion.

•  This research note looks at nanotechnology insulation, a new method of improving energy efficiency in our homes.
•  Energy efficiency is of particular relevance in the UK, as our housing stock is one of the least efficient in Western Europe [1].
•  As well as combating climate change, and simply reducing energy bills, we see that improving energy efficiency can help fight fuel poverty, improve health, improve energy security and provide  jobs and GDP growth.
•  Houses lose heat through all their surfaces, but walls and roofs are the chief culprits, together responsible for up to ~60% of heat loss [2]. We look at how insulation has traditionally been employed to reduce these losses.
•  Traditional methods have disadvantages. Cavity wall insulation can transmit damp across the cavity [9]. Solid wall insulation is expensive and may alter the look of the inside/outside of a property [3].
•  The use of flammable cladding as part of external wall insulation may have contributed to the devastating consequences of the June 2017 Grenfell tower fire [13].
•  We see that nanotechnology insulation can remove or mitigate these deficiencies, insulating internally/externally in a fireproof fashion with only a few mm of thickness, either instead of traditional methods, or where traditional methods have failed, or cannot be used.
•  We estimate nano-insulation has a potential market size comfortably over 10 million homes in the UK, a small fraction of which we estimate would make it a billion-pound industry.

Why is improving energy efficiency important?

The most obvious reason is that it brings down energy bills; with a more energy efficient home, less energy is needed to heat it. The UK Energy Bill Revolution – a fuel poverty alliance – estimates that, with the introduction of substantial government measures to address energy efficiency, comes a £8.61 billion per annum saving in total energy bills across the UK housing stock [1]. For some, cheaper bills are simply a nice-to-have, but for millions of people in the UK living in fuel poverty, this is a critical issue.

Fuel poverty is calculated by gauging if a household’s income would fall below the official poverty line after spending the actual amount needed to heat the home. The average fuel poverty gap of these households – that is, the amount needed to escape fuel poverty – is £371 a year [4]. The Government estimates that 2.32 million households (10% of households) were in fuel poverty in 2014 [5]. As well as being simply miserable, a cold home can lead to health problems with potentially very serious consequences. It is estimated that over 40,000 people died from the cold in the Winter of 14/15, a 15 year high [5].   For every £1 spent on reducing fuel poverty, a return of 42 pence is expected in National Health Service (NHS) savings [1].

Buildings are responsible for almost 37% of all UK carbon emissions. By improving energy efficiency, this could be cut considerably. The UK Energy Bill Revolution suggested measures (mentioned above) could lead to an estimated annual reduction of 23.6 MtCO2 (metric tonnes of CO2) by 2030.

This is perhaps the least obvious reason energy efficiency is important. The IEA defines energy security as the uninterrupted availability of energy sources at an affordable price [6]. If less electricity is consumed, for example, availability of electricity should be easier to achieve as there should be no need to build additional generation capacity to cope with demand (other than to replace existing generation capacity) and prices are more likely to remain affordable; by simple economics, if generation capacity is limited versus demand, prices tend to rise. Consuming less energy also makes the economy more resilient to changes in energy prices.

How does a house lose heat?

Houses lose heat mainly through the walls and roof, as these are the largest areas in contact with the outside world. Therefore, the biggest energy efficiency improvements can be made by insulating these. Figure 1, below, shows how a house gains and loses heat.

Lofts are typically insulated using rolls of wool insulation, or polystyrene boards. For walls, things are slightly complicated by the fact that houses have different types of wall depending on when they were built. Older properties (<1920) tend to have solid walls. Newer properties tend to have cavity walls, made up of two walls with an air gap between them. Existing cavity walls can be insulated relatively cheaply by injecting or blowing insulation into the cavity (Cavity Wall Insulation (CWI)). New cavity walls have insulating panels installed between them.  Solid walls are insulated either externally, or internally (External Wall Insulation (EWI), Internal Wall Insulation (IWI)). Externally, insulating material of thickness 50-100 mm is fixed to the walls, and a protective render, or decorative cladding, goes over the top. Internally, rolls or boards of insulating material are fit over the walls.  Figure 2, below, summarizes the remaining potential for the main methods of insulation in the UK at the end of 2016, including 5.4 million homes with cavity walls but without CWI (31% of properties with cavity walls) and 7.8 million homes with solid walls but without insulation (92% of properties with solid walls). Of the 31% homes with cavity walls but without CWI, 1.3 million homes are classified as hard to treat with CWI.

Other measures such as double glazing, insulating floors and draught-proofing are also beneficial, though some measures are marginal in terms of cost/benefit, having long payback periods, see [8] for more detail. 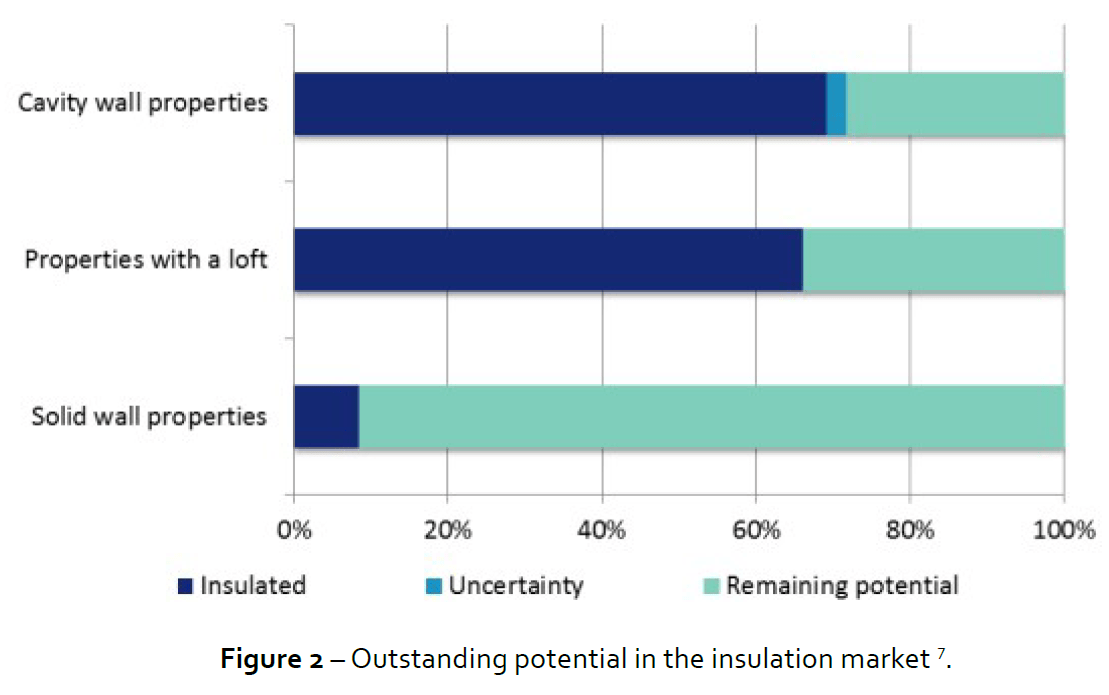 According to Which?, most cavity wall insulations do not cause any problems. However, under certain circumstances, the insulation can transmit rain across the cavity, causing damp problems internally. Which? state that risk factors for this happening include the house being exposed to severe levels of wind-driven rain (see Figure 3, below), being located in an unsheltered position and/or having poorly built or maintained walls [9]. A survey on 250,000 homes found that about half of the homes with CWI it investigated had damp, slumping or missing insulation. Should this figure hold true across the total housing stock, it will mean that of the six million properties with cavity walls guaranteed by CIGA (Cavity Insulation Guarantee Agency), [3] million could have problems [10].

If CWI is found to be the cause of a damp problem, solving this can be very expensive. The existing CWI has to be removed, remedial work carried out drying and removing mould and the house has to be re-insulated as if it were a solid wall house, which is naturally much more expensive, see below. The extraction and remedial processes are together estimated by us to cost up to ~£6k for an average house.

Both IWI and EWI are considerably more expensive than CWI. Which? quote figures per house of £330-720 for CWI [11], £8000-22000 for EWI and £4000-13000 for IWI [9]. This is one of the reasons that only 8% of solid wall homes have insulation, as stated above. Other factors include:
•  EWI may alter the look of a property, so may not be employable in conservation areas.
•  Installing IWI is a very disruptive process and reduces the floor space slightly.
•  Landlord obligations to have a minimum EPC (Energy Performance Certificate) of E, do not come into law until April 2018 for new tenants, and April 2020 for existing tenants [12]. EPCs range from A-G, with G being the least efficient.
Another key problem with EWI is the potential flammability of the cladding used. It is suspected that this contributed to the devastating effects of the fire on the 14th of June at Grenfell tower in London. The cladding involved had a polyethylene – or plastic – core instead of a more fireproof alternative [13].

The cutting edge of insulation – nanotechnology

Nanotechnology is the branch of science that deals with the very small ( a nanometre being 10^-9 meters). The diameter of a human hair is 100,000 nanometres. New forms of nanotechnology insulation have recently been developed that mitigate or remove the problems listed above for traditional insulation. Nanoinsulation works by trapping air – a naturally good insulator – within a carefully constructed labyrinth of passageways, thus slowing the transfer of heat. The example we use here is a patented product called Econanosil ® ECO 1 resin. It has the following advantages, according to the manufacturer (this comes from the website [14] – which is translated from Italian and not well written – or directly from the manufacturer):

•  Flexible – can be used on walls (interior/exterior), ceilings, floors, balconies and concrete structures. The product can be applied by roller, brush or spay.
•  Considerably lower thermal conductivity than traditional insulation. ECO 1 resin has a thermal conductivity of 0.0024 W/mK (watts per metre-kelvin), whereas mineral wool insulation has a value of 0.o4 W/mK [15]. Lower values of thermal conductivity mean less heat is lost per unit time.
•  2 mm of resin is equivalent to approximately 70 mm of mineral wool.
•  Transparent.
•  The last two factors mean it does not greatly change the look of a property externally – therefore potentially usable where EWI deemed inappropriate for listed properties. Internally, it does not impinge on the floor space as IWI does, and is far less disruptive to install.
•  Significantly cheaper than traditional solid wall insulation. 350 PPM estimate that treating a house with ECO 1 is approximately 50% of the cost of EWI.
•  Fire resistant to European class B S1 D0 standard (therefore suitable for high rise buildings; the lack of weight is an advantage here too).
•  Forms a protective barrier against moisture, mould and corrosive agents (e.g. salts), so ideal for coastal regions where CWI may not be appropriate. Also means that walls should stay in better condition for considerably longer than untreated walls, reducing the need to repaint, for example.
•  Long lasting (estimated at 80 years). 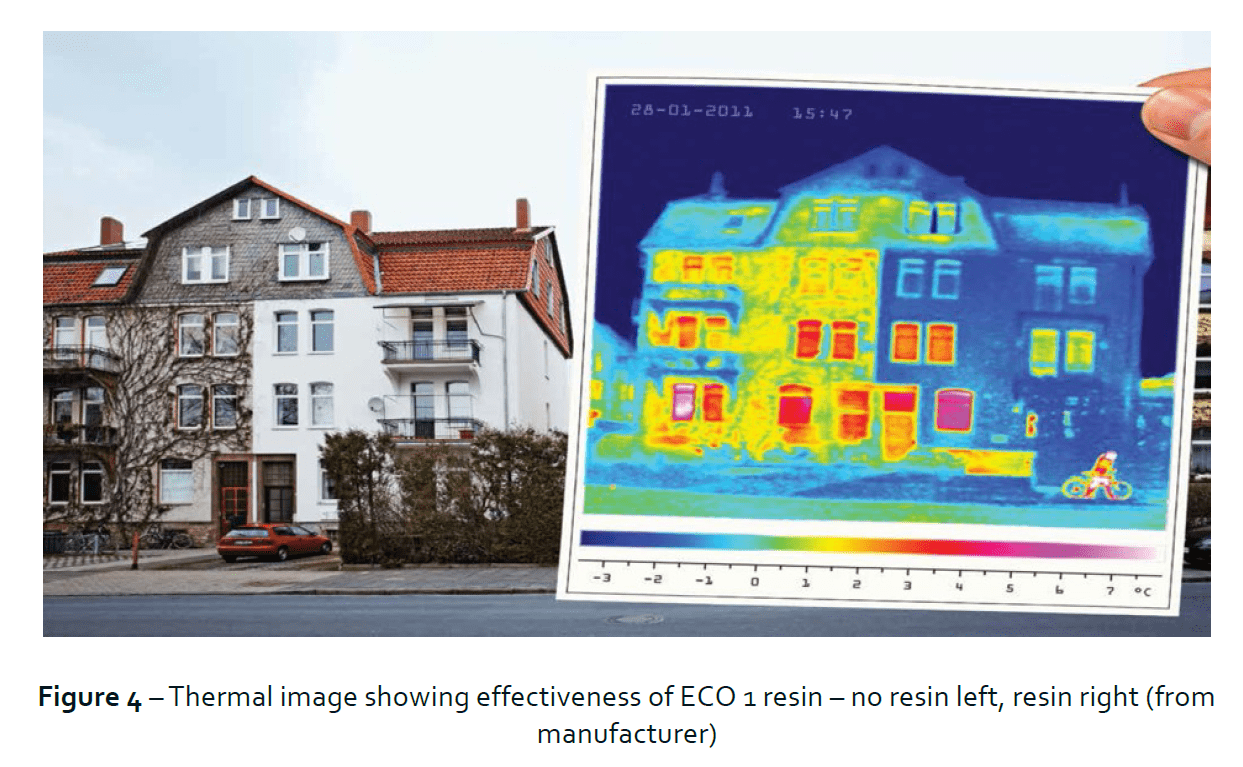 Summary – the market for nano-insulation

If we simply look at using nano-insulation to treat the walls of residential buildings in the UK, the total market is sizeable. The key sub-markets include:
• The 1.3 million properties with cavity walls which are hard to treat with CWI [7].
• Properties in coastal regions that are not suitable for CWI.
• The properties with cavity walls that have developed problems (estimated at 3 million [10]), and the CWI had to be removed.
• The 7.8 million solid wall properties without insulation [7].
Combined, the market is comfortably over 10 million homes in the UK. 350 PPM estimate that treating just 166k homes – a small fraction of the markets listed above – is needed to make this a billion-pound industry (assumes cost of £6000 per house).  This is why investors should be looking at this area.