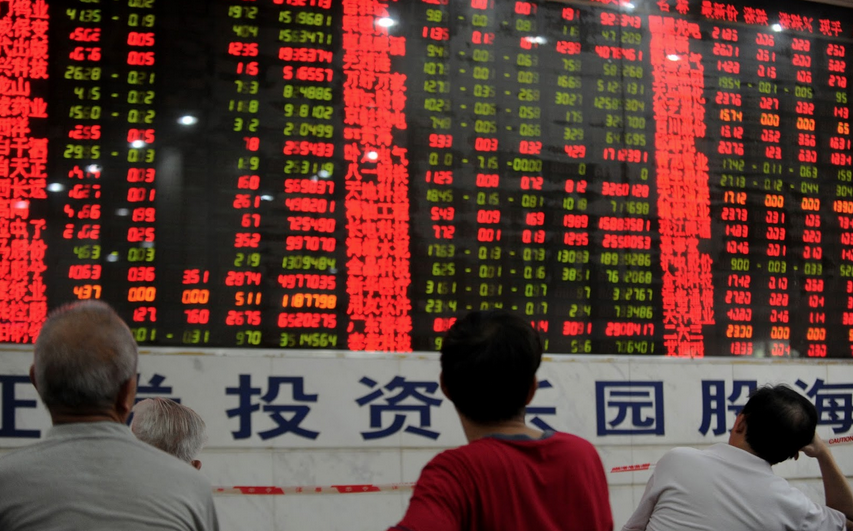 We have a theory about the Chinese stock market crash. And it’s just that, a theory because as anyone who studies the Chinese economy knows, there’s a certain lack of transparency in the data that makes it difficult to pinpoint the real reason why the market has been lurching downward in recent months.

But one thing is pretty much certain, it’s not a crash. In fact, it’s doesn’t look like a market correction either.

China’s recent stock market slump has provoked a lot of speculation about the cause. Over the last few years, many commentators have suggested Chinese banks are over-leveraged – some estimates suggesting domestic lending might exceed 200% of GDP. The problem is drilling down to the core of the figures is challenging (it’s reckoned to be more like 140% officially, but perhaps with estimates of the lending for ‘shadow banking’ it’s close.) However there’s been a rumbling fear of an impending Chinese banking crisis. The Chinese regulators are attempting to stabilise their securities market and inject more liquidity into the system, and recently we’ve followed announcements from their sovereign wealth fund they’ve been buying ETFs to assist efforts to provide liquidity.

It all smacks a bit of quantitative easing. But in the post-crisis era of the West, there’s an element of looking for the next big financial crisis. Chinese banks debts are growing as a result of public sector borrowing and, given the underlying strength of their economy, there’s no reason to panic. So why the panic on the stock market?

We have an alternative theory:

In 2012, the new Chinese premier Xi Jinping launched a far reaching anti-corruption drive. Since then over 414,000 officials have been disciplined and 201,600 prosecuted. In 2014 alone 15,450 Chinese officials were convicted on corruption charges. High end restaurant closures are up, sales of luxury goods are faltering and we have it on reasonably good authority from some of our Chinese contacts that there are rumours high class brothels are going out of business too. In fact, all the things that could be used as bribes or inducements to close corrupt deals are having a hard time of it as public sector financiers are worried they’ll get investigated if they’re caught dealing with the wrong type of hospitality.

In the commercial sector, particularly in banking with the huge increases in public sector domestic lending, there is now a high (and understandable) level of risk aversion. This has effected the flow of money within the economy. Investors in Chinese stocks used to be heavily geared on investments. Bank interest rates were high back in 2008 (around 7.5%) you’d need returns of 10-12% per year to make it worthwhile to go long on Chinese investments. But then they dropped sharply and never recovered. So incentives for shorting stocks has become more attractive to the growing number of Chinese investors, who are playing off the lower (but still good) interest rates against short term stock market returns.

So on the one hand, we see public sector borrowing, domestic debts, corruption arrests and convictions rising. With that much corruption guiding the free flow of capital within the Chinese economy, cleaning up the public sector was bound to affect market liquidity. And interest rates have fallen at the same time. As a result, the average Chinese investor is working their money harder by shorting stocks and playing the interest rates game as best they can. And they’re assiduously avoiding long term investments that could lead to getting arrested if a public official is involved at some point, which covers a lot of investment opportunities in China. It’s a recipe for a crisis that might look like the same stock market chaos we saw in the Western banking crisis in some respects, but it’s really unique to the Chinese situation.

But what we’ve heard from our Chinese contacts (now in discussions with the big 5 Chinese utility companies) is there’s a new directive from the Chinese government to invest overseas to diversify China’s economic base. It’s another move to bring more stability to the stock market. We might not get back to 10% growth of old, but this is good news for renewable energy developers like us to hear the Chinese authorities are seeking overseas energy projects. It’s a typically Chinese response to a crisis, the government tends to shy away from using economic policy to address growth and stability and tends to co-opt their public utilities and banks to assist them in a more indirect fashion.

Often there’s relatively simple reasons for market behaviours. We look for macroeconomic explanations, but in China’s case it might simply be the unexpected outcomes of the anti-corruption drive. There are more economically focused theories that given us pause for thought, but in reality, the underlying growth trend of the Chinese economy is till strong, and Chinese banks aren’t over-leveraged compared many Western banks… so macroeconomic theories don’t quite explain the situation as neatly as they might if this was the US stock market in 2009. Maybe if 15,504 public servants in the USA were jailed on corruption charges, we’d see something similar happen there too.

2016 outlook for carbon reductions has never been better…